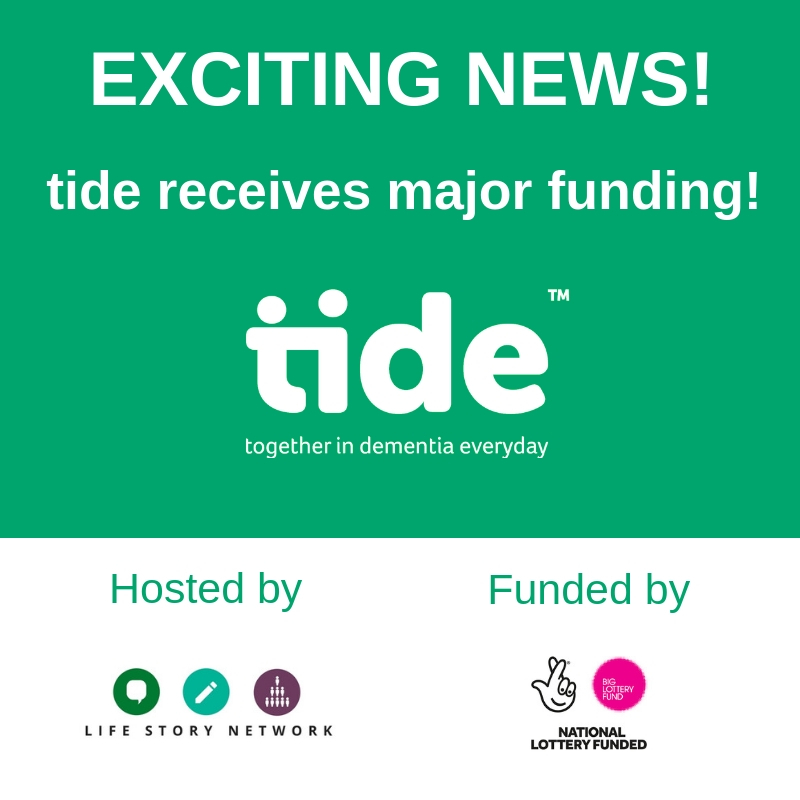 tide Receives Lottery Grant to Roll out Programme Across the UK

We have been awarded a major grant from the Big Lottery Fund to support carers, and former carers, of people living with dementia across the UK.
Skip to main content

Life Story Network CiC has been awarded a major grant from the Big Lottery Fund to support carers, and former carers, of people living with dementia across the UK, through their pioneering programme ‘tide – together in dementia everyday’. The organisation has been awarded a £1.2million grant from the Big Lottery Fund, which uses money raised by National Lottery players to help communities achieve their ambitions.

There are currently 800,000 people living with dementia and 670,000 unpaid carers of people with dementia in the UK. Two thirds of people with dementia live at home and most are supported by unpaid carers. Unpaid carers of people living with dementia save the state £11bn a year, but many say that they do not have the services and support they need. Over the next three years, the funding will enable carers to connect with each other and to increase their knowledge, skills and confidence to participate as equals. ‘tide’ enables carers to realise the benefits of a collective voice and begin the process of evolution into a social movement of carers to bring about change at all levels of policy, research and practice.

Following a pilot in the North West of England and the establishment of a Scottish network, funded by Life Changes Trust, this funding will allow for the expansion of the network both geographically, and in increasing the diversity of carers represented. tide will roll out in other parts of England, including Liverpool, Manchester and Yorkshire, as well as establishing programmes of work in Wales and Northern Ireland. Additionally, this funding will allow the network to reach into communities that are seldom heard, including: Black and Minority Ethnic communities; Lesbian, Gay, Bisexual and Transgender groups; Irish Traveller and Gypsy communities; young carers; and male carers.

“I am delighted that the progress made by tide over the last eighteen months has been recognised and that we have been awarded this substantial grant, so that more carers across the UK can benefit. tide's work has proved most effective in equipping carers of people with dementia the knowledge, skills and confidence to participate as equals with professionals in a variety of ways. To enable carers to be confident in their caring role or find new roles when caring ceases creates benefits for individuals and society as a whole.”
Jean Tottie, Chair and Founding Director, Life Story Network and tide – together in dementia everyday

“We’re proud to be using National Lottery funding to increase support for carers of people living with dementia. ‘Together in Dementia Everyday’ empowers carers to use their knowledge and experience to influence the decisions that affect them and those they care for.”
Joe Ferns, UK Funding Director at the Big Lottery Fund